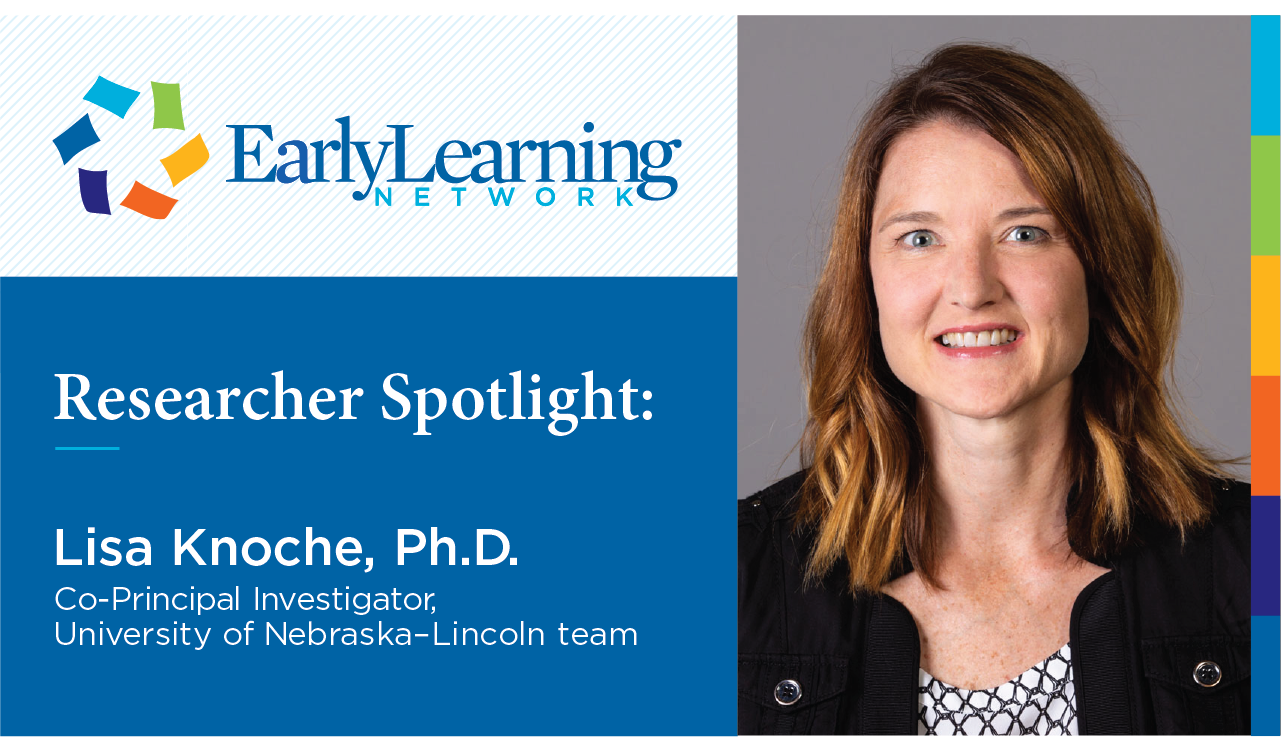 Q & A with Lisa Knoche

The University of Nebraska–Lincoln’s Lisa Knoche shares her perspective on the Early Learning Network in her dual role as a researcher and network-wide project leader.

She sheds light on the need to understand ecological influences on student progress and achievement, such as the varying interactions between policy, community, school and family. In Nebraska, her team is exploring differences among the state’s urban and rural settings.

What is your role in the Early Learning Network?

I am co-Principal Investigator of the University of Nebraska–Lincoln’s Learning Frontiers research project, where I work closely with the project team to implement the research activities.

I also serve as co-Principal Investigator of the Early Learning Network Lead project and have the privilege of helping strategize and support network-wide activities.

What makes you most excited about the Early Learning Network?

The Early Learning Network provides a unique opportunity to explore and understand factors that support optimal, positive trajectories for children across the preschool to third grade transition. This research will influence practice and policy —  with an end goal of promoting student success and narrowing the achievement gap.

I am most excited to understand the synergistic effect of factors across grade level. For example, how does what happens in one grade interact with the next grade to promote achievement? I’m excited because this set of studies is being conducted across multiple geographic settings and school district locales throughout the U.S. A one-size-fits-all approach will not suffice — and the variation among the network teams will help us to understand the nuances at play with regards to settings.

Finally, I’m excited that we have an opportunity to pull together information across multiple levels — policy data, classroom observations and in-depth, longitudinal data. When combined, these multiple data sources will be powerful.

What strengths or distinctive attributes does the Nebraska team bring to the Early Learning Network?

The Learning Frontiers team at the University of Nebraska–Lincoln contributes a unique geographic sample to the Early Learning Network, and prioritizes exploring ecological influences on student progress and achievement. Specifically, our team is looking at differences between Nebraska’s urban and rural districts, both of which serve students at sociodemographic risk. We have an opportunity to learn more about the interactions between policy, community, school and family influences on children’s learning and development across these settings in one state.

While Nebraska’s educational policies have a shared genesis, in accordance with state policy mandates, their operationalization into practice varies widely across rural and urban settings. Furthermore, local policies and educational practices across rural and urban communities also vary based on context (e.g., per pupil expenditures, curriculum selection), especially in states like Nebraska, which allow for local control of schools. Such distinctions may significantly influence processes, practices and children’s learning and achievement in direct and indirect ways, and are therefore a significant point of investigation. Consequently, our findings will enrich the overall conclusions of the Early Learning Network.

Additionally, our partner sites in Nebraska are highly committed to early childhood education and identifying best practices to support students’ achievement. Collaboration among stakeholders is extensive. This commitment provides a unique opportunity to gather insight on study findings, and ultimately, shape practice and policy. Strong partnerships with our school district colleagues are instrumental to the success of this network research.

What challenges have you encountered thus far in your project?

There certainly have been a few challenges with a project of this magnitude and scope.

Our first challenge was identifying our “non-attender” sample; that is, children who had not participated in center-based programming prior to kindergarten. In many of our rural communities, we did not identify any “non-attenders” because all children were participating in the local, publicly funded preschool programs. Consequently, we had a smaller sample of “non-attenders” than projected — primarily because we did not have students to recruit in many communities. While this presented a challenge for our study, it is a strength of the state’s preschool programming.

Another challenge we encountered was the extensive spread of children from preschool to kindergarten settings in the longitudinal study. Our preschool sample included 37 schools and expanded to 108 schools in kindergarten, which creates unique challenges for teacher recruitment and data collection efforts.

What are you most looking forward to in the coming months?

The UNL team will be engaging in much exciting work over the coming months. Our team is diving into data analyses and beginning to explore preliminary findings.

We will begin to investigate the kindergarten data to identify the progress of preschool attenders as compared to non-attenders. In these analyses, we will address rural and urban site differences and similarities.

I also look forward to sharing the research findings with school administrators and advisory boards. The exchange with key stakeholders will allow us to gain important perspectives on our data.